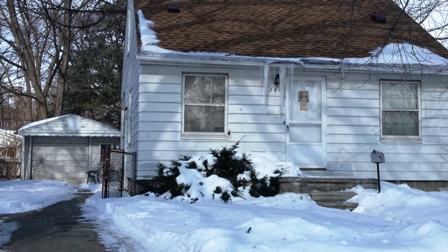 Recently, I was down in the Detroit area visiting someone in the hospital. On my way home, passing under the 8 Mile Road overpass on I-75, I suddenly had the urge to take a little detour into the city of Hazel Park. I exited the freeway, and headed into the endless maze of crisscrossing streets and cookie cutter homes. My destination? 361 E. Elza Ave. There, I found a small 2 bedroom home that appeared to be abandoned. It didn’t look like much … just another empty, neglected house with nothing to attract the attention of people passing by. But to me, this unassuming, dilapidated little house brings out an overwhelming sense of heart-felt affection and memories!

I stopped my car out front and took several pictures. Who knows how much longer that house will be there, I thought. I know I will never forget it. Married less than 3 months, my wife Kim and I moved into that tiny house in January of 1985 and began one of the greatest adventures of our lives: full-time pastoral ministry. Tabernacle Baptist Church in Hazel Park had just called us to come and serve on their pastoral staff and they allowed us to move into one of the homes they owned. For Kim and me, it was our base of operations for the next 5 years as we worked with teens and adults from the church. Fresh out of Bible college, Lead Pastor Dave Marks and his wife Liz took us under their wings and helped us “learn the ropes” of ministry in an environment of love, humor, safety, forgiveness and grace. How thankful we are for the privilege of serving with the staff and people of that church. In 1990, God led us to South Baptist in Flint and the adventure continues today. But, we will never forget our years in Hazel Park!

Psalm 103:2 says: “Bless the Lord, O my soul, and forget not all his benefits”. God’s benefits to His children come in all different shapes and sizes. 361 E. Elza Avenue is just one of His benefits that Kim and I will never forget!